Having a baby is a lot like a round-the-world backpacking trip. The last few weeks with my new baba, Nova, have had me chuckling to myself as the similarities keep appearing. Don’t believe me? Here are seven reasons…

As much as you don’t believe it before you start your trip, staying in a hostel (especially a dorm room) is an easy way to make friends. It’s as simple as walking into the room to claim your bunk. A quick smile to your new bunk buddy soon leads to a game of beer pong and a mutual hangover.

Having a newborn is a ridiculously simple way to make new friends. Whether it’s sharing soothing techniques in the queue at Tescos with a random, comparing sleepless nights with new NCT friends or going to all of the yummy mummy baby classes in your area, you have an instant friend magnet with your little one.

On your travels your camera gets used to within an inch of its life. Everything is shiny new and awe-inspiring. Coming home from a RTW trip and trying to organise a billion pictures is an impossible task.

Having a baby is much the same. From capturing the first smile to snapshotting each milestone week, you’ll have accumulated approximately 1,356,789 photos within the first two weeks.

Travelling so much you develop the ability to sleep on a plane or whilst sitting on a cramped coach. Lights on? Not a problem, you can still sleep. Loud noises? Who cares.

A baby feeds every few hours and has no concept of night or day. That means that you’ll quickly reawaken (‘xcuse the pun) your sleeping skills so that you’re not too deprived. You’ll be easily able to fall asleep within minutes to bank a power nap.

Back to Basics Eating

On a RTW trip you’ll likely live on 12p super noodles because they’re well, cheap, but also super quick to whip up. When you’re cooking in a shared kitchen with one microwave (let alone a hob) between about fifty other people you want to cook (if you can call it that) as quickly as possible. After all more time and money for nights out and bucket list ticks is more important.

With a baby it might not be about eating super noodles, but it’s definitely about getting back to basics. When you have a baby permanently attached to you and only one arm free (typically the weaker one), any dinner that can be knocked up in thirty seconds is a favourite.

As soon as you announce your upcoming RTW trip you’re inundated with advice from friends, family and even strangers. Combine that with advice from the Foreign & Commonwealth Office, travel agents and reps, and you’ve got yourself an overflowing pot of conflicting info. One person will tell you it’s unsafe to travel to that country and the next will tell you to stop worrying.

It’s much the same with a bambino. Everyone becomes a so-called expert and sprouts words of (sometimes questionable) wisdom. The scary thing is how advice from professionals who supposedly work to the same guidelines can differ so much. Confused.com

Chances are if it’s your first RTW trip you’ll have an oversized, bulging backpack containing everything but the kitchen sink. You’ll have every gadget going and tonnes of clothes for every eventuality. You’ll probably get sick of carrying it all and end up paying to send half of the (unused!) stuff home.

With a baby it’s much the same. There’s the travel system, blankets, nappies, muslins, wipes, spare clothes, gadgets of every kind and much, much more…

Whether it’s learning Spanish or French for your upcoming travels or getting by with a few cheeky phrases to help you order a drink or two, chances are you’ll improve your language skills.

Having a baby means learning to interpret different cries, gurgles and grizzles. You won’t be amazed at how quickly you’ll learn the hungry cry and the nappy change whinge – they’re the ones you’ll hear the most!

Read more: How being pregnant is a lot like travelling (It really is, honest!) 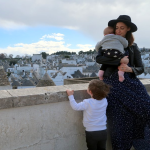 Char Taylor is the blogger behind Taylor Hearts Travel, a blog that is redefining family travel, sharing inspo & tips for worldly adventures with mini-explorers. Char is a UK based travel blogger, lover of stylish travel & mama. She has worked with lots of travel brands and great tourist boards, and her blog has also won the attention of the likes of Huff Post Lifestyle, Company Magazine’s High-Street Edit, and the U.S. Travel Association.

Blog
It was hard to pick just 11 but here are 11 highlights from my time as a travel blogger!

Blog , Blogging
What’s the difference between a blogger and a journalist? This question has cropped up a lot recently, particularly with the recent case of Crystal...

Blog
We’re 15 days into January and, according to statistics, 33% of people will have given up on their New Year’s resolutions already. Yes, January...

Blog
We’re almost two weeks into our second lockdown in Wales and as England are going into their...

Blog , Blogging
COVID-19 has affected us all in one way or another but small businesses have really felt the...

Blog
We’ve got a few days until Halloween and it’s not too late to make it something special!...

Blog , Blogging
I asked if you had any blogging related questions on Instagram stories last night and when the...

Blog
I’ve recently turned 33 and I’m finally getting to an age where I don’t feel like a...

Blog
If it sounds too good to be true then it probably is. We’ve all heard this phrase...

Blog
Today I want to talk about creating a capsule wardrobe because since I discovered this way of...

Blog , The Mama Hack
Oh it’s the big dilemma isn’t it. You’ve had one child and you’re starting to think about...
Load More